The only song about the Coachella Music Festival

With Coachella fever rising as the first weekend approaches, now is the perfect time to enjoy “Going to Coachella”, the only song that’s actually about the festival and was created to evoke its feeling and spirit. Indio studio recording artist Lia Shapiro of ALiEn TriBe became inspired when she stood outside her recording studio one evening during Coachella and heard the music floating through the air.

“Going To Coachella, c’mon, get your beads on!!”

Lia captured the vibe of Coachella, the experience of it and the buzz all around town in this fun 7 minute song. The first half of the song uses a moderate beat then the beat picks up and picks up again in the final minute to full dance level.

As Lia explains, “I created this song during that time when the valley was buzzing and private jets, planes and helicopters filled the sky bringing celebrities over from Los Angeles and around the world. You’ll hear a helicopter in the music, not a real one… I re-programmed some sounds in my Korg keyboard and came up with it.”

About Lia Shapiro and ALiEn TriBe 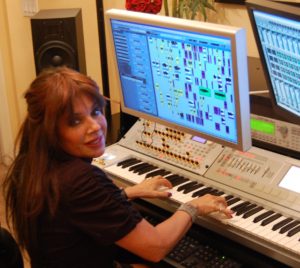 Electronic music artist Lia is a songwriter, performer, mixer, engineer and producer who records as ALiEn TriBe as well as several collaborations with artist around the world. Her 10 albums and EP’s explore over 12 musical genres such as EDM, rock, chill, electronica, tribal, world, trance, trip hop, progressive rock, experimental and even some good old fashion American traditional. “My hope is that people will get an emotional experience when they hear my music.” She lives and creates all her music in Indio, California only two miles from the Coachella Music Festival.

This site uses Akismet to reduce spam. Learn how your comment data is processed.

12 albums and EP's from EDM and dance to progressive to symphonic electronic to rock and more. Enjoy ALiEn Tribe's fresh and unique emotional music featuring songs with deeply felt lyrics and instrumentals with original sounds and compositions.

This website uses cookies to improve your experience while you navigate through the website. Out of these, the cookies that are categorized as necessary are stored on your browser as they are essential for the working of basic functionalities of the website. We also use third-party cookies that help us analyze and understand how you use this website. These cookies will be stored in your browser only with your consent. You also have the option to opt-out of these cookies. But opting out of some of these cookies may affect your browsing experience.
Necessary Always Enabled
Necessary cookies are absolutely essential for the website to function properly. This category only includes cookies that ensures basic functionalities and security features of the website. These cookies do not store any personal information.
Non-necessary
Any cookies that may not be particularly necessary for the website to function and is used specifically to collect user personal data via analytics, ads, other embedded contents are termed as non-necessary cookies. It is mandatory to procure user consent prior to running these cookies on your website.
SAVE & ACCEPT
Back to top